Want to get a rapid-fire, head-to-head, competitive trip back through all of videogame history? Then be sure to join us Thursday, September 1st, at 7:00PM at Austin’s North Door, as JUEGOS RANCHEROS presents a sneak-peek at Multibowl, a brand new multiplayer mashup of hundreds of vintage games.

Co-created by Bennett Foddy (creator of QWOP, GIRP & one of the leads behind Sportsfriends) and Alec Thomson (himself co-creator of last year’s Fantastic Arcade favorite, Beglitched), Multibowl gives two players a fast-paced series of tiny fragments of emulated games collected from the past 30+ years, and keeps a running meta-tally of each player’s success.

The Multibowl winner is the one who can adapt to each fragment as it’s tossed their way, be it a classic fighting game, a cult-classic arcade puzzler, or straight up just 15 seconds of the actual Super Nintendo version of Mario Kart. 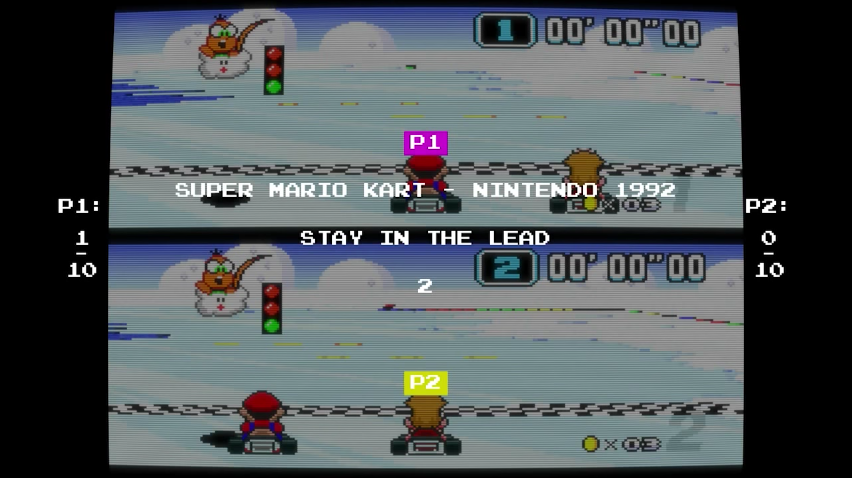 Ahead of Multibowl‘s official festival debut at Portland’s XOXO Festival, and its subsequent official tournament appearance at this year’s Fantastic Arcade, JUEGOS RANCHEROS will be presenting the game as a special sneak-peek warm-up for tournament hopefuls, alongside a few other Fantastic Arcade preview selections.

Multibowl and more will be playable September 1st, at 7:00PM at North Door, 501 Brushy Street, Austin, TX 78702. The show is free, all ages, and open to all the public, so come join us as we drink, play and meet the people changing the way we think about games!