After another month’s break, and a little bit too much time since I showed these games live, presented below is the latest in our regular series of indie games both local and global worth paying attention to, fully annotated & linked up for your pleasure. 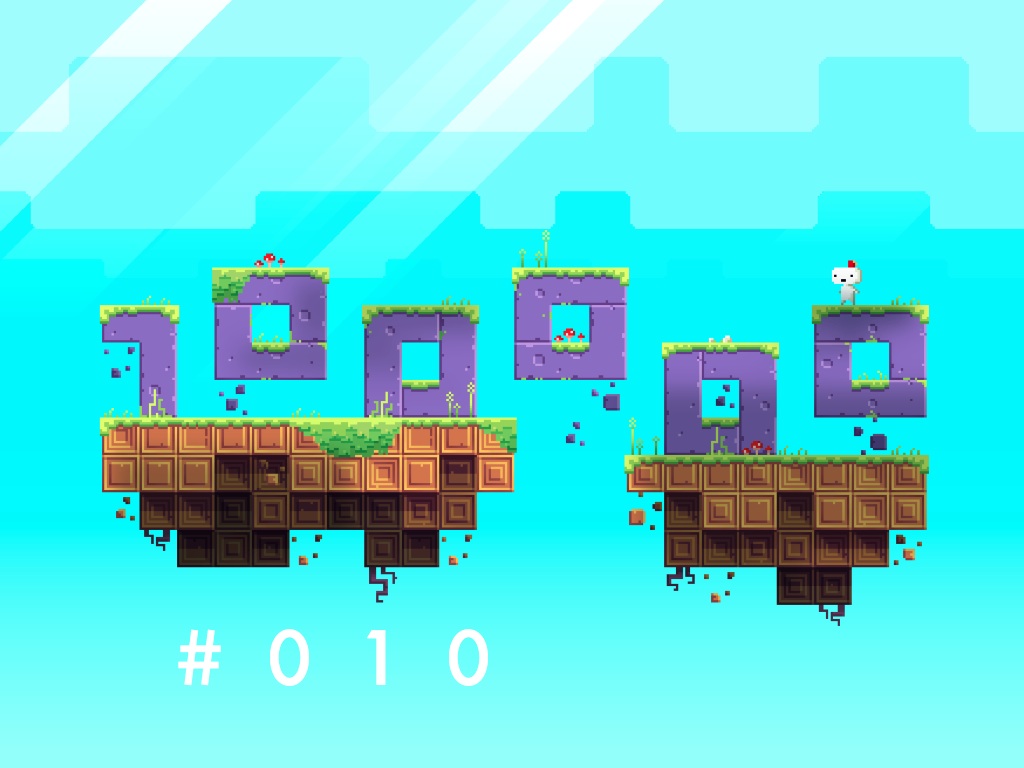 “it’s been long enough since the last Fistful that we’ve formally mentioned FEZ, which just recently surpassed a hundred thousand copies in sales. Many of you have already made your way through it, or have seen it in Indie Game The Movie, but if you haven’t, download this tonight for your Xbox 360 — underneath its cute platformer shell is as complex and coherent a foreign world as I’ve ever visited — this instantly became one of our all-time favorite games.” 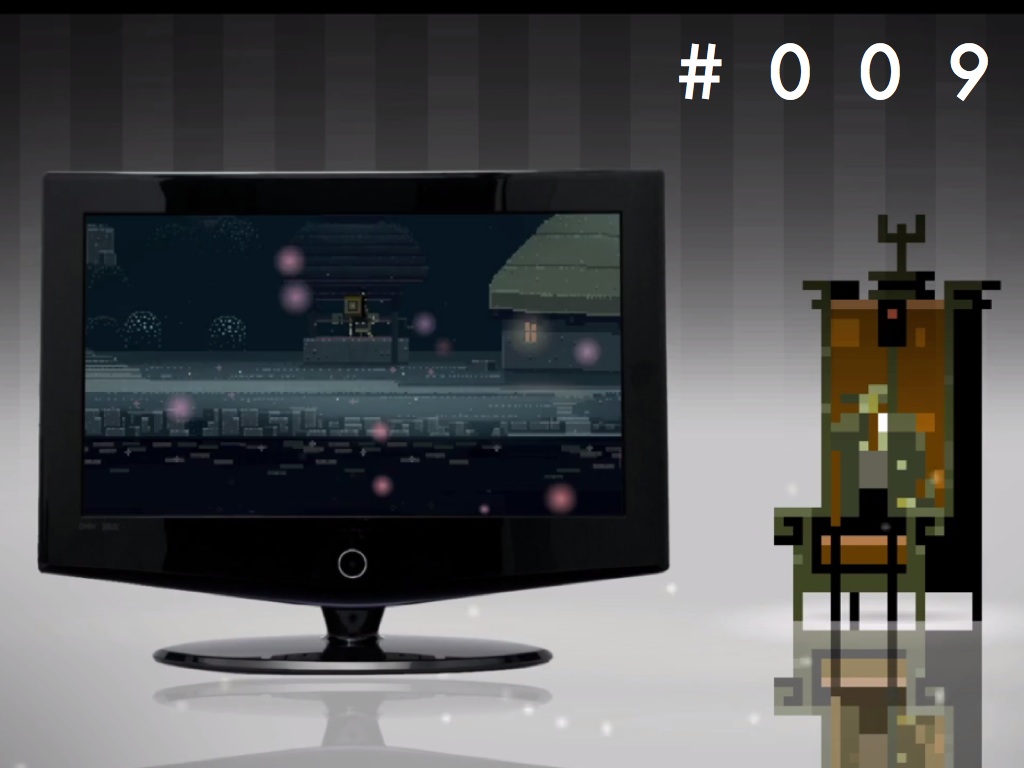 “…speaking of older favorites, Superbrothers’ SWORD & SWORCERY EP was released for PC & Mac since last we spoke, so even those of you without an iPhone or iPad now have zero excuse to not set out on this adventure musical.” 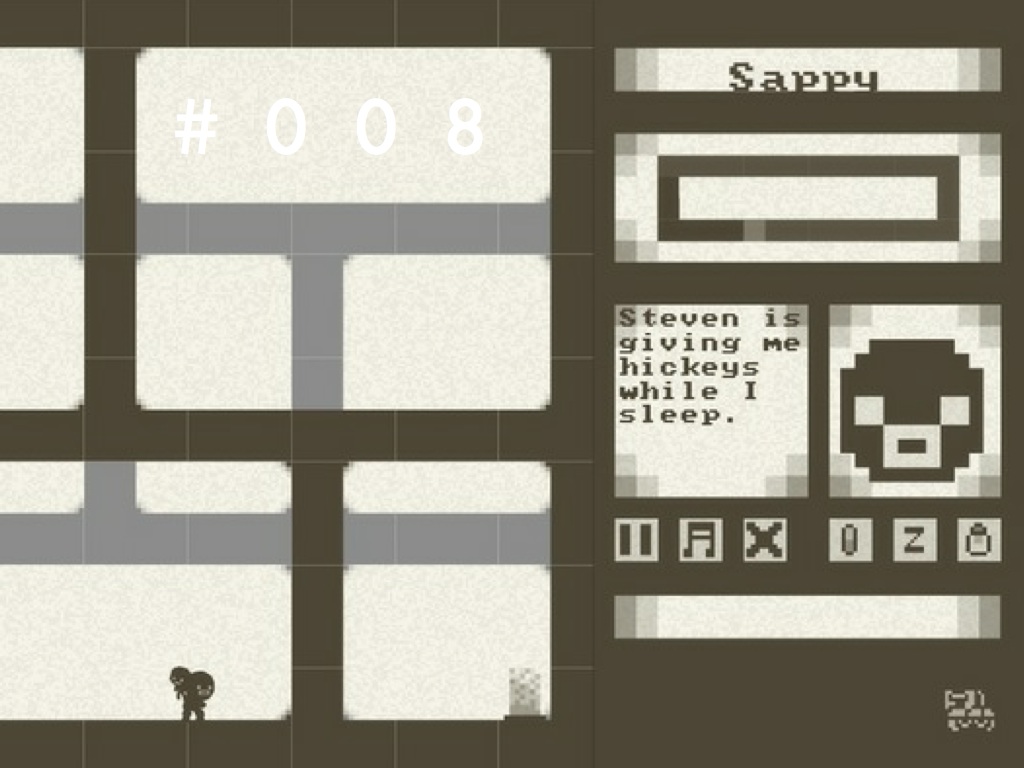 “… I’m also going to go way back a couple years and mention this, because I’ve been re-playing it a bunch lately. This is TIME FCUK, co-created by Edmund McMillen, one half of the team that made SUPER MEAT BOY. This is a free Flash game that on the surface is a pretty traditional platform puzzler, but is wrapped in a really effecting looping time-travel narrative, where you’re constantly talking to past and future versions of yourself who are all traversing this same space. I desperately would love for this to be re-released for the 3DS.” 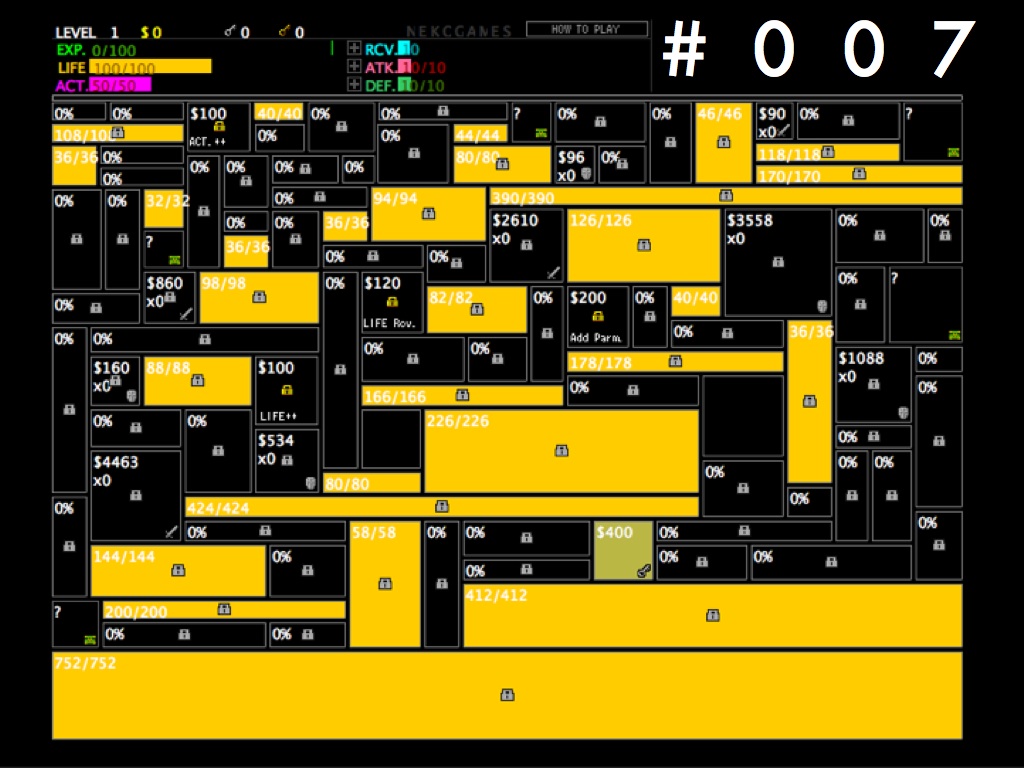 “What you’re looking at is the elements of a traditional role playing videogame boiled down to its barest essentials. Each of these boxes is essentially a dungeon, the yellow ones with an end-level boss, and you traverse them simply by clicking, collecting loot, and leveling up to take on the larger boxes. So, it’s DIABLO, essentially, stripped of its clothes.” 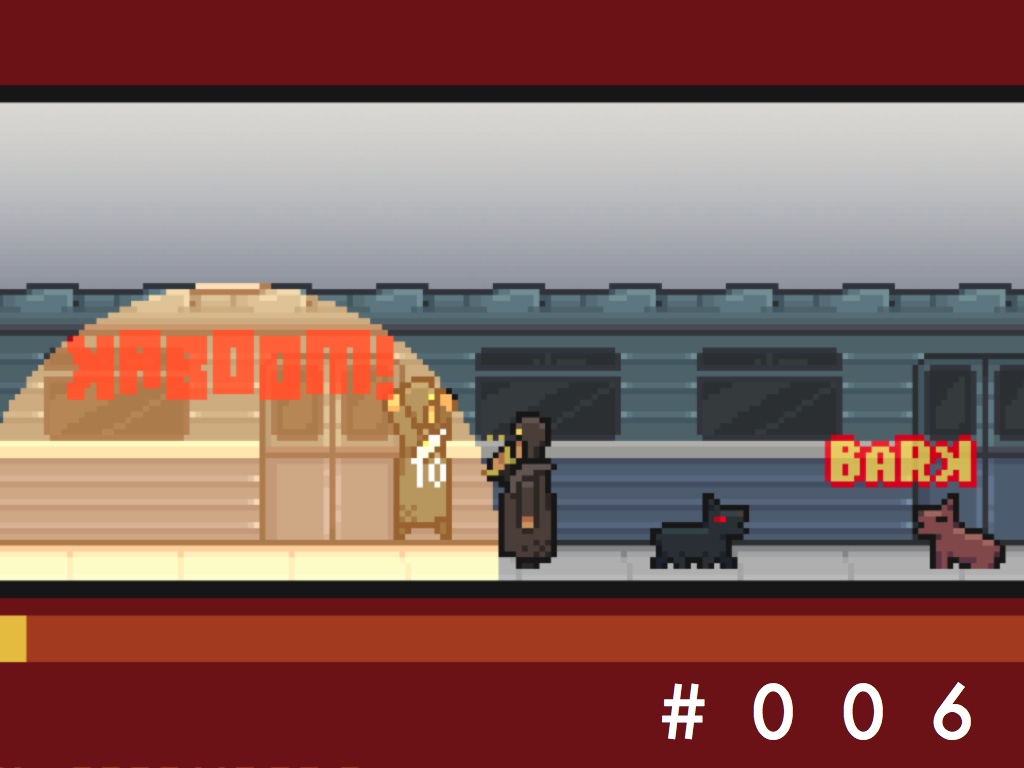 “The story here is that about 6 months ago I found this amazing blog post about packs of feral dogs that exist in real life in Moscow’s subway system. Not only do they freely ride the trains, they’ve invented this new hunting skill where they run up behind and bark at drunk people to get people to drop their shwarma. Anyway, I put out a call on twitter for it to be made into a game, and Miguel took up the mantle with this awesome little score-based shwarma collector.” 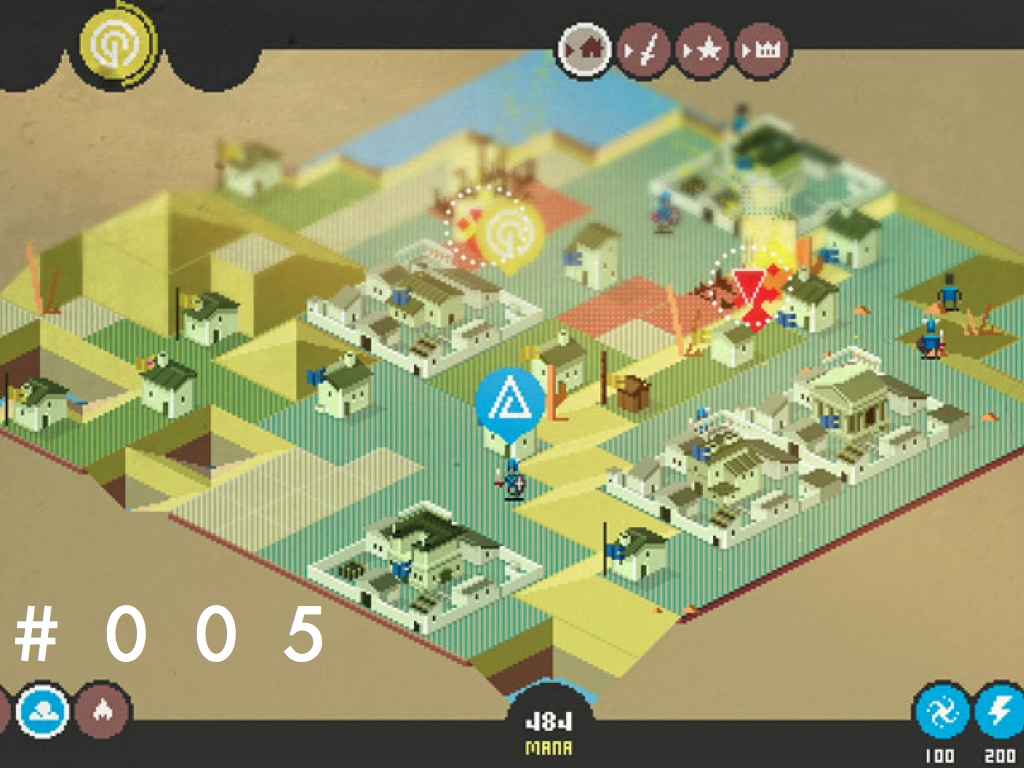 “This one is notable here as an example of how to do retro-nostalgia right — if you’ve ever played POPULOUS you know what to expect, but the studio behind it, Electrolyte, have given this a gorgeous facelift with this muted palette and the tilt-shift effects you can see here. Definitely recommend looking at this one as a great example of the importance of drawing players in with unique aesthetics.” 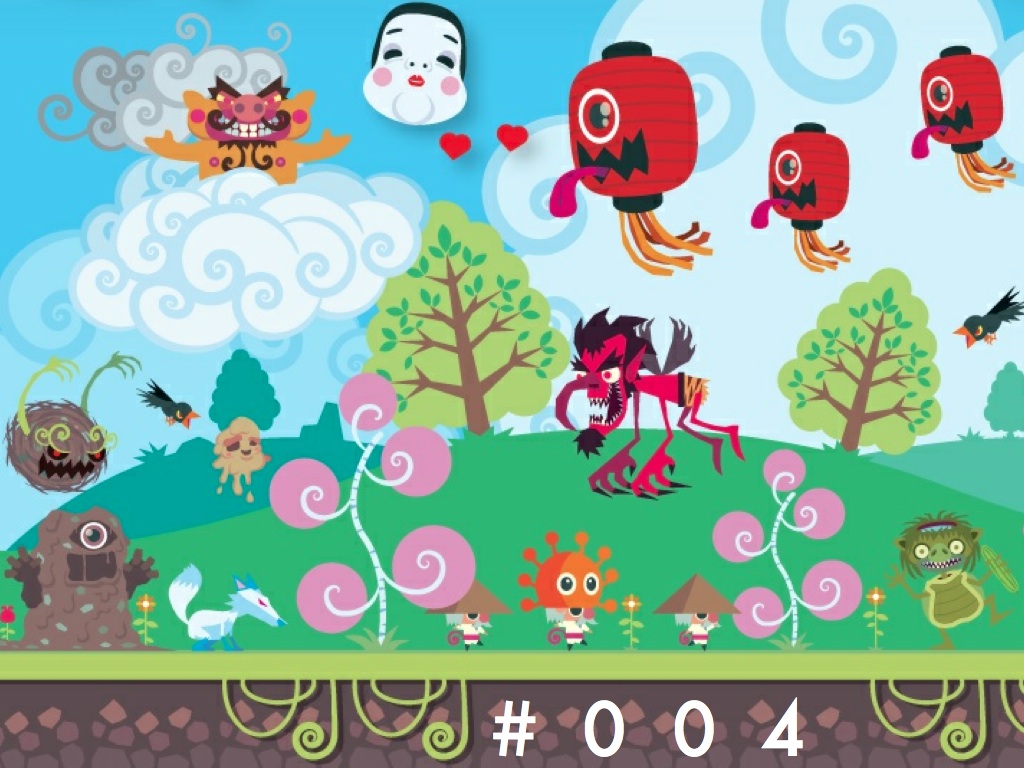 “… a light horizontal shooter where you play as that guy up in the clouds there, protecting these little pilgrims on the ground from attacks by all these various traditional Japanese monsters you see here. It’s super beautiful and has a great, mushy, sense of velocity and motion.” 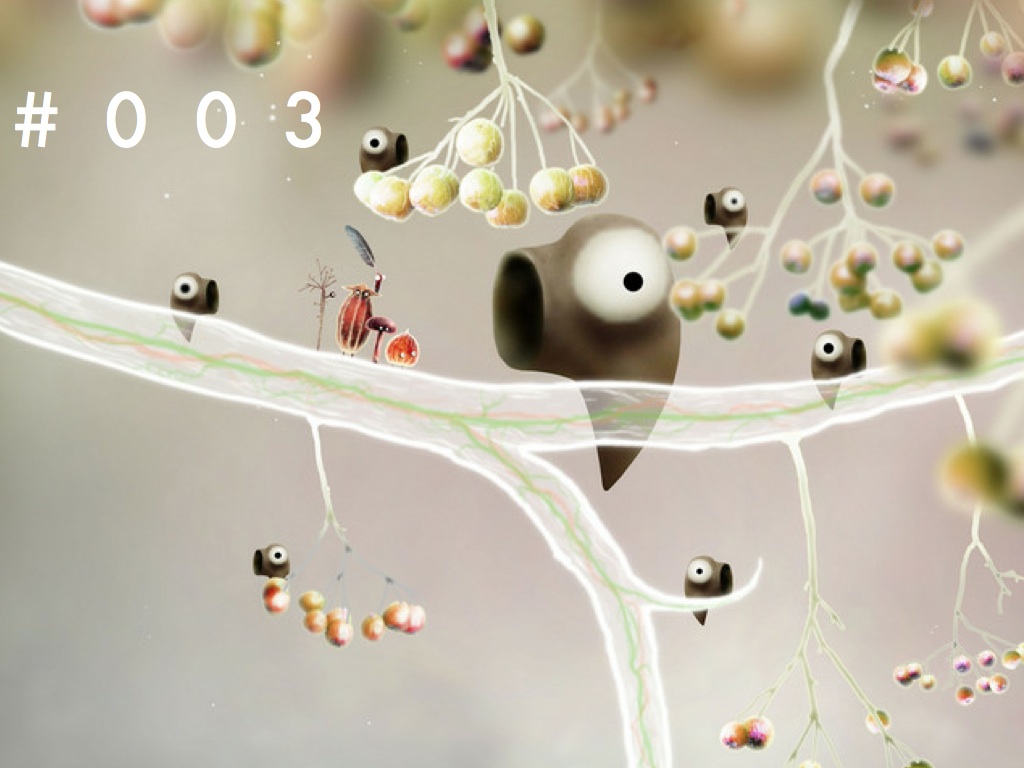 “… a traditional point and click adventure from Amanita, the same studio behind a ton of gorgeous adventure games like this like SAMOROST and MACHINARIUM (which I think we featured at the very first Fantastic Arcade). As the name suggests, this one’s about interacting with the plant and insect life that have gathered in this tree, and — in addition to being beautiful — has just about the most fucking delightful sound and music design I’ve ever heard. You’ll very easily fall in love with this one.” 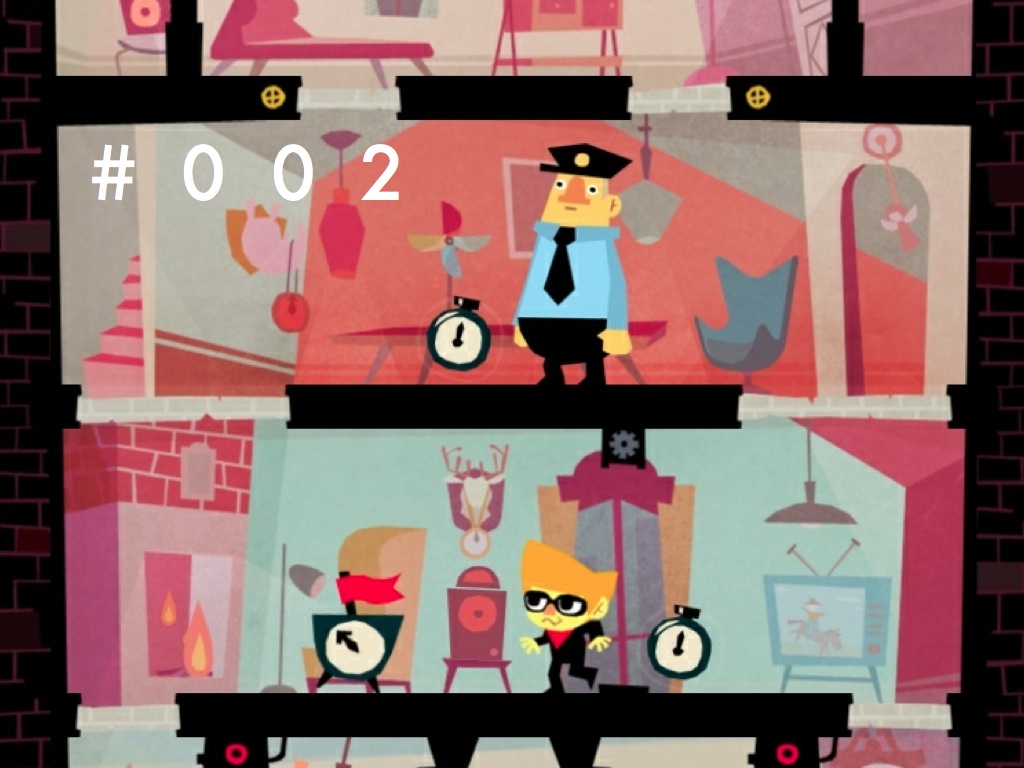 “It’s come to my attention that I’ve totally neglected to mention this in previous months: this is BEAT SNEAK BANDIT, a one-button iPhone game where you tap the screen to the rhythm in order to advance through this mansion, stealing back clocks while avoiding guards & security systems. For a one-note game, this has a ton of variety to it, and has done a lot of smart things to tie all its animation & navigation to the beat.” 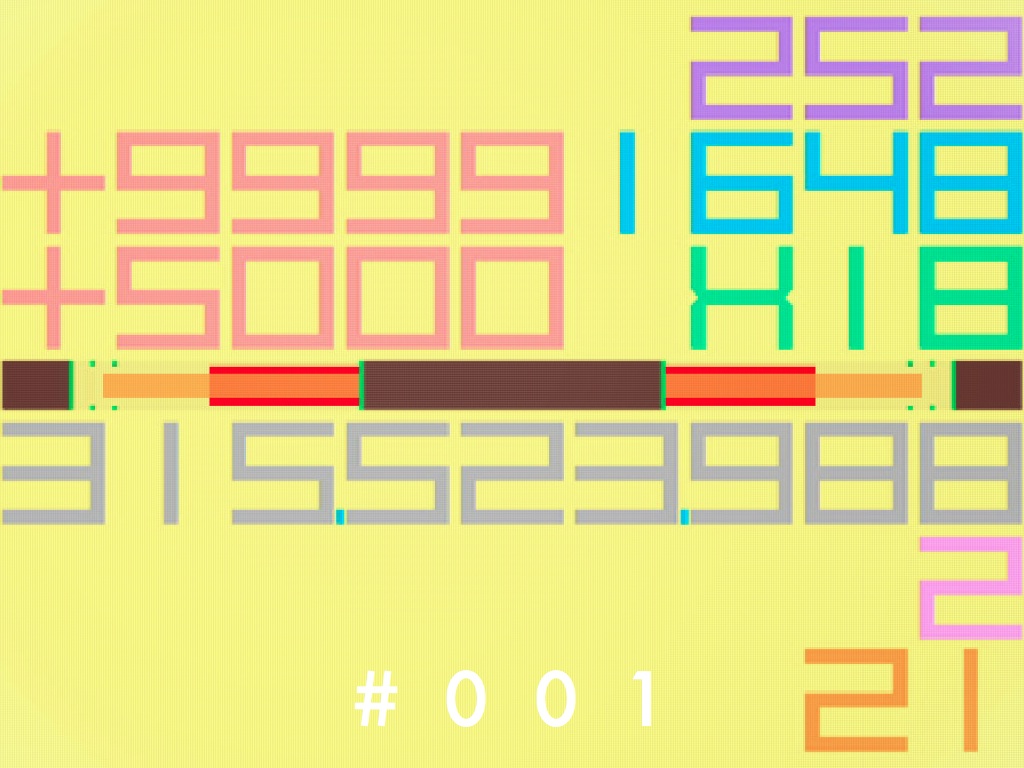 Developer: The Game Atelier | Platform: iPhone/iPad | Get it: App Store

“…one of my favorite new iPhone games, your goal is to artfully tap and release your iPhone screen in order to keep your gauge in the middle as full as possible, without touching either the outer or inside edges. It’s another game boiled down to almost zero, but presented so artfully that it’s impossible to put down, and its basic game mode is a free download, so you’ve got no excuse not to play.”