It seems like only four weeks ago that JUEGOS RANCHEROS graced the pages of the Austin Chronicle (oh, it was? oh, we were named part of 2011’s Best of Austin?), but now we’re back!

Grab a copy of the Chronicle between now and next Thursday, flip to page 44, and there we are: five whole column width’s worth of Wiley & Adam & I talking about the birth and future of the collective. 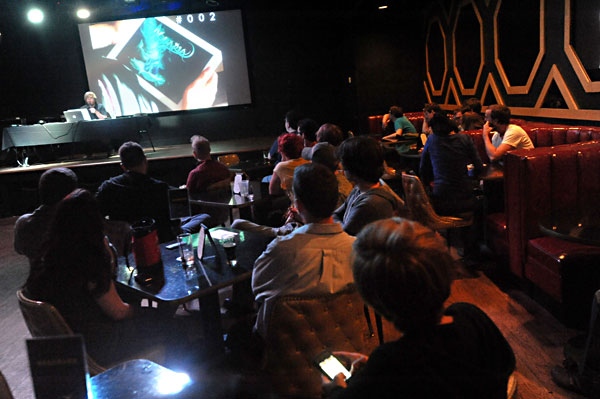 Or, you can just click here and get the full skinny (and the full color version of our goofy mugs) right now:

Even as attendance grows each month, Juegos’ goals are loftier than just regular drinks with kindred spirits. “We’ve been able to get people from big studios and people from tiny studios sitting down together eating burritos and talking about stuff, and that just seems good in the long term,” says Saltsman. “I don’t know if we’ve been able to get as many non-video-game people to come as we’d hoped initially, but we’re still working on that.”

One particularly successful meeting included playing an as-yet-unreleased game called Johann Sebastian Joust that isn’t technically a video game since no screen is necessary to play. The game is simple: Grab your motion-sensing controller, pull the trigger to signify that you are ready to play, and keep your “jousting” hand from moving too quickly or you’ll be out. Of course you will be encouraging your opponents to jostle their controllers and get eliminated. “Joust is kind of the poster child for introducing people to indie games,” Wiggins says to explain its allure. “You can see the whole game right there physically, and it immediately makes sense.” As Juegos attendees played, Joust managed to entice the tastemaking and often difficult-to-impress waitstaff at the HighBall, who were soon lining up to show their skills. Getting Austin to rethink the definition of a video game is step one in an ongoing attempt to encourage the local nongaming population to consider interactive media as something within their artistic purview.

Thanks to James Renovitch and the Chronicle for paying attention, and for helping to get the word out to hopefully at least a handful more people that haven’t yet made it out!

The next meeting of the JUEGOS RANCHEROS will be at the Highball Saturday, December 10th before returning to its regular Sunday service. Mark your calendars now!