What does an Oxford bioethics teacher and a former member of Cut Copy (?!?) know about videogames? Come find out this Sunday, February 12th, at 4PM, at The Foddy Winter Olympics: our ninth edition of JUEGOS RANCHEROS at The Highball that will show you exactly why Bennett Foddy‘s become one of indie gaming’s most notable (and funniest!) cult-hit creators.

A little background: it all started with QWOP, a free web game (later ported to the iPhone) that took the button-mashing simplicity of 8-bit classics like TRACK & FIELD to its totally illogical polar extreme, giving you direct control of each muscle of your athlete’s legs and asking you to learn how to walk all over again. A true viral hit, soon YouTube & Tumblr were full of people attempting to do just that, as well as some inspired cosplay and the best animated Cosby-sweater-photo of all time.

Then came GIRP, which turned rock-climbing into a game of Twister for your keyboard, WINNER VS LOSER, a competitive, slapstick return to TRACK & FIELD for drunks, and, most recently, POLERIDERS, a two-player polo game played out using hyper-realistic vaulting-pole physics.

So, what will our Winter Olympics consist of?

First, the Texas debut of MEGA GIRP, a remix of the rock-climbing hit by Doug Wilson, the creator of JUEGOS-favorite JOHANN SEBASTIAN JOUST. Played out on four dance-mats laid out like a giant full-body keyboard, MEGA GIRP turns those finger-Twister gymnastics into the real-life counterpart. Wear stretchy pants! 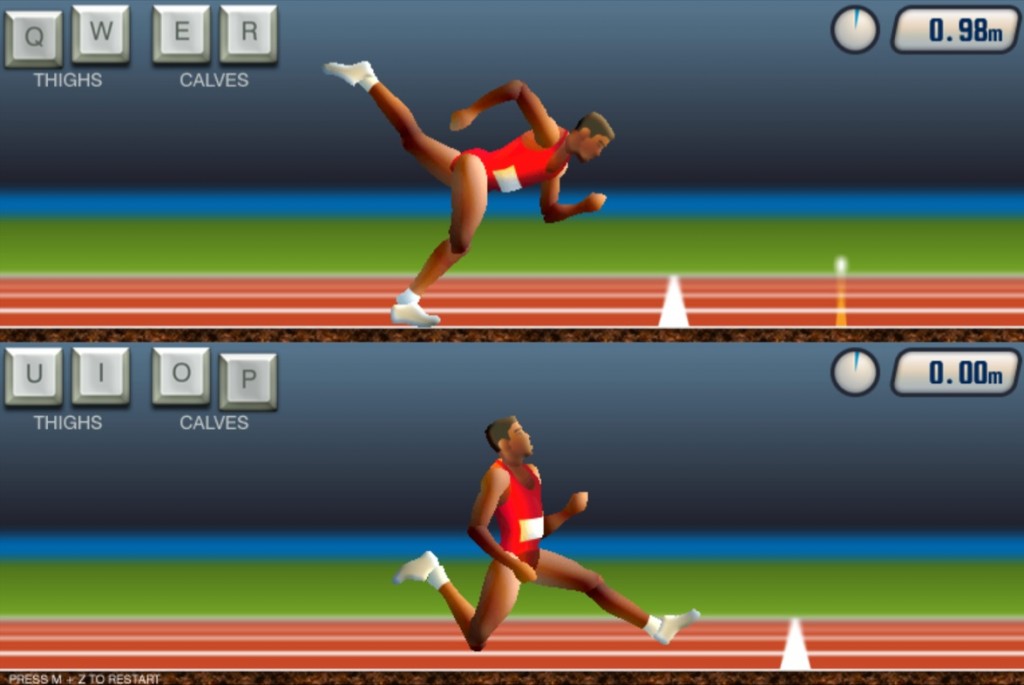 We’ll also be debuting: multiplayer QWOP! — a head-to-head version that sizes up just who the real muscle-manipulating champion really is. And we’ll obviously also have lots and lots of pole-riding and winning versus losing: give all of them a try via the links above & get your fingers (and whole body) limbered up to take the championship!

Everything will be kicking off Sunday, February 12th, promptly at 4PM at The Highball, 1142 S Lamar Blvd, Austin, TX 78704! Come hang out, enjoy the Highball’s Happy Hour drink specials, and say hello to the people changing the way you think about games!