In some horrible twist of Gregorian fate, the first Thursday of the new year lands directly on the first actual day of the new year, so come nurse your holiday hangover in a dark room this Thursday, January 1st, at 7:00PM at Austin’s North Door, where we’ll be screening two episodes of our local favorite TV show: GameCenter CX.

If you’re unfamiliar with the legacy of GameCenter CX (now in its 18th season in Japan, and sometimes known stateside as Retro Game Master), the premise is simple: comedian Shinya Arino is confined to a room and made to marathon-complete retro games from the NES forward in a single sitting.

This can, on rare occasion, simply take until sundown — more often, the brutal difficulty can push game sessions well past midnight, where Arino’s exhaustion ratchets up the challenge. 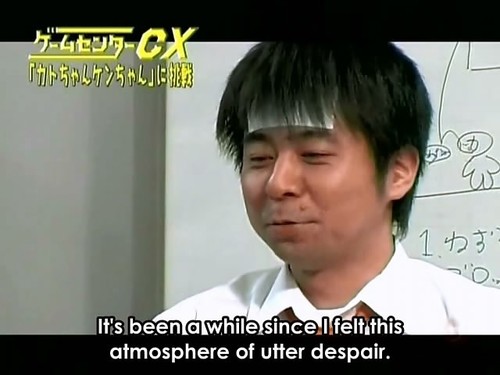 While the prospect of watching a middle-aged man play an 8-bit game to completion may not sound like the most thrilling way to ring in the new year, we can promise that skilled editing — and the universal sense of triumph that comes from seeing someone overcome adversity that many of us painfully recall from our own youth — makes this honestly one of the best TV shows about videogames ever created.

We’ll be screening two episodes: the first starting quite promptly after 7pm, followed by a short intermission, and the second up until the venue’s next act. It’s OK if you show up feeling as bad as you look — probably all of us will be.

Come spend the evening with us this Thursday, January 1st, at 7:00PM at North Door, 501 Brushy Street, Austin, TX 78702! The screening is free and open to the public. We’ll be back to our usual, brighter-eyed and bushier-tailed programming in February!